LAS VEGAS, NEVADA – Republican Nominee for Nevada’s 4th Congressional District, Sam Peters, has been declared the winner of the campaign’s second debate after he and Steven Horsford clashed in KNPR’s Monday evening debate. The candidates addressed questions fielded from community advocates and leaders on topics such as inflation, taxes, and housing. 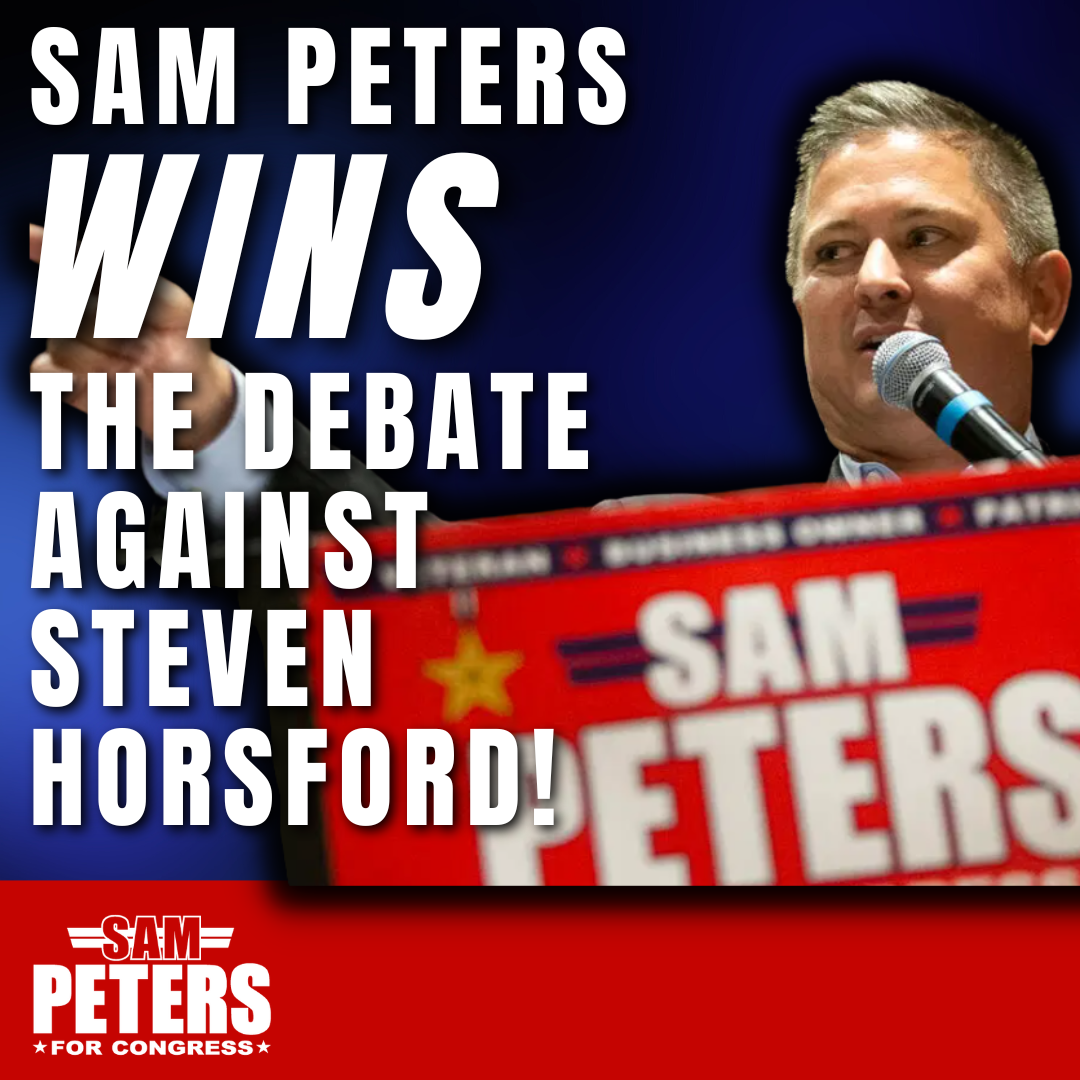 “I have to thank Steve Horsford for agreeing to this debate.

Once again, he is on the record with views more in line with the liberal Democrat party line in DC than the people I meet from Hawthorne to Hualapai Way. All the while he lies, dodges, and lies some more about me, his votes in DC, his radical liberal positions on the issues, and the failures of the Biden administration. Horsford managed to show the voter why he was never qualified for the office he currently holds.

Let’s start with the questions he dodges. After two debates he will not:

1. Commit to a balanced budget amendment, preferring to pass the blame like a hot potato to different presidential administrations. While congress has shirked it’s responsibility to pass an actual budget since 1997.

2. Commit to Voter ID, a measure 70% of Nevadans have gotten behind to make the system fair for everybody.

3. He only denied he would ban late-term abortion after being asked point blank by the moderator in the second debate. Finally, after declaring me extreme – he admits to being the extremist.

Here is another thing I noticed-Horsford always hopes you don’t track the story from the start.

Horsford will say he feels your pain at the pump, but as a stuffy elitist, he will never take responsibility for the inflation happening on his watch as a result of massive government spending.  Maybe it’s because he can’t bring himself to tour the district and see the frustration in the eyes of a woman trying to buy baby formula at a grocery store in Tonapah while the product is behind lock and key.  I visit all ends of the district.  And I see the frustration.

And let’s talk about Horsford’s never ending hypocrisy.  If your business was forced to accept PPP loans, like mine had to, Horsford ignores the fact the government MADE you take those loans by shutting you down – while he sat silent and allowed us to be called “non-essential”. To add insult to injury, he doesn’t see the difference between the small business owners and hard workers being forced to shudder their businesses and a basket weaving PhD who voluntarily made an awful financial decision.

Horsford will talk all day about making sure you have an election you can count on or quiz me on what I thought of the 2020 election on a given December morning of that year, but he will not talk about how members of his party erode trust in our system by not committing to common sense Voter ID laws.

I could mention more items, but he’s always putting the cart before the horse and his ideological commitments before commonsense. Maybe it’s because he has spent all those years in a world where he could ignore you while paying attention to his mistress without consequences.

Well, the consequences are here. I said it during the debate and I’ll say it again now- I look forward to hearing him concede.

Sam is the Owner of Peters Family Insurance, a three time “Best of Las Vegas” risk management firm. Prior to settling in Las Vegas, Sam spent two years as a field manager for a Fortune 500 company where he led thirty-one storefronts as a business consultant executing nearly $100M in annual revenue.

Sam retired as a Major from the United States Air Force in 2013 after spending time in Afghanistan, Iraq, Panama, Korea and various installations in the United States over a career that spanned more than twenty years.

He earned a Bronze Star for his efforts in Afghanistan and was consistently recognized as #1 among his highly efficient and competent peers.
To learn more about Sam, visit https://www.sampeters4congress.com/.